Which Jesus Do You Prefer?

Late in the holiday season everyone gets a little nuts.

For example, one of the national cable news ran a contest earlier this week to see what kind of Jesus people preferred:  A Brad Pitt blonde Jesus, the most realistic Middle Eastern Jesus or a black Jesus. Folks were supposed to Tweet their responses to be announced the following day.

It reminded of a funny story. When I was in college I spent a summer working with the churches behind the Iron Curtain. (Now, since I write for midlife folks, I don’t need to explain what that was…but if you don’t know, this is a good excuse to call your mom today.  Do it.  Now.)

Anyway…one of the gals I worked with was from California and we got the biggest kick out of the fact that her grandmother had sent with her 100 wallet sized pictures of Jesus to give to the little children so that they would know what Jesus looked like.

We giggled every time we gave them out. This is the one she sent with us. 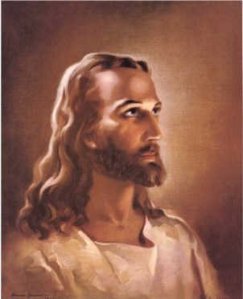 Back to the contest. I never tuned in to see which of the Jesus-types was most preferable, because the whole idea was familiar to me. For a many years now I have wondered a version of that same question.

Which Jesus do most people prefer: the one in the manger or the one on the cross?

Jesus in the manger is so sweet, so innocent. Lying there in the straw, or in his mother’s arms-what’s not to love about a new baby? He has his own star, rich merchants come to find him, and angels announce his birth to the lowly shepherds.

All is calm.  All is bright.

But then there is the other Jesus.  Full-grown God power walking in human sandals.

Teaching with authority in the temple, challenging the religious status quo of the day; healing people, performing miracles and causing lowly fishermen to dress down the ruling class.

No sleep in heavenly peace for that Jesus. Or anyone around him for that matter.

Our world, generally, likes Baby Jesus. Non-threatening…one they can hold in their arms and put him anywhere they want.  But then the baby grows up and things get messy.

I read something a while back that captures this well by Lowell E. Grisham:

“When this Jesus grows up and wears a beard, he will be a complex and complicated figure. He will challenge the social, political, and economic conventions of his day. He will touch and heal lepers and unclean women whom it was illegal to touch. He will declare a kingdom that is greater than Caesar’s. He will open his table fellowship to people who do not even try to be good. He will treat foreigners and those from other religions with the same compassion and generosity he offers his own kindred. He will reject the expectations for a military Messiah who would punish and drive away the unjust and the enemy by force. Instead, he will turn the other cheek and go the extra mile with courageous nonviolence in the face of abusive power. He will expose religious corruption and challenge the authority of the state. He will freely forgive the prodigal and call the most-righteous-ones hypocrites. This is not a child’s story.

But it is a life-giving story. It is a story that does not shrink in the face of tragedy, injustice, exploitation, and alienation. It is a story of God embracing everything — everything that happens to human beings — from birth to death. It is God-with-us, healing brokenness, overcoming oppression, and reconciling estrangement.”

God’s perfect gift, His own son…I want that gift.

God’s redemptive gift, His own son…I need that gift.

My prayer for all who read this is that you will pause long enough to remember and reflect on the Person of Christmas.

Which one do you prefer?

“It is God-with-us, healing brokenness, overcoming oppression, and reconciling estrangement.”*

Yeah, I’ll take that one.

This entry was posted in Faith. Bookmark the permalink.

4 Responses to Which Jesus Do You Prefer?