One of my favorite beaches that I go to is a number, not a name. At least that is what my best friend tried to explain to someone as to where I was in Florida.

I thought that was adorable. And true.

For those who know and love Highway 30A in the Florida panhandle, images of clear water from the Gulf of Mexico and gorgeous white sandy beaches come to mind. Little beach communities like Seaside, Seagrove, Old Florida Beach, Rosemary Beach flow one into another-each possessing its own unique character.

It’s the beach trip destination of my girlhood…well, that’s not entirely true-but close enough. Forty plus years ago 30A was still on an architect’s desk as my family vacationed in nearby Panama City, THE destination at the time for Atlantans. Pictures of 3-sunburned little girls playing in the pool and at the oceans edge are documented in my mom’s photo albums. Yearly vacations were a huge sacrifice for our folks and provided my sisters and I some of our favorite childhood memories. We ate cereal and sandwiches in our motel room, with milk and mayonnaise kept in coolers. We ate out only one meal a day.

Daddy and us girls, 1965. Check out the brunette with the killer bun and widow’s peak. I look like Eddie Munster!

We thought it was divine.

A day trip to Shell Island and dinner at Captain Anderson’s Seafood Restaurant marked the end of our week before we headed home the next morning. Souvenirs of shell dolls and orange blossom perfume were the rage back then, brought back as a reminder of beautiful Florida. Even now if I stop at a Stuckey’s, I can’t help looking to see if they still exist.

We thought we were the luckiest girls in the whole world. And in truth, we were.

In the past few years I have rekindled my love for the Florida Gold Coast. I take an annual trip with my sister and their group of friends, called (lovingly) The Flakes. (More about them later date.) I also have been there with my sister’s family the last couple of spring breaks and last year my sisters and I gave my mom a Girl’s Getaway week there.

It’s a slice of heaven. Most of the time.

If you know anything about the Florida Panhandle, you know that it is a delightful place 8 months of the year but the other 4 months (June-September) it’s hot as Hades and neither the air nor the sea move at all. Complete stillness. The Gulf of Mexico becomes the World’s Largest Saltwater Bathtub.

I have a pic from 2004 (somewhere) with my two oldest sons and my niece sitting in the middle of the water on floats, eating Cheese Nips uncontested. It was the first and only time we were in Florida for a family vacation. Our boys and their Georgia cousins have grown up vacationing off the coast of SC where the waves are great for body surfing and you can get beaten half to death by crashing waves as you exit to the beach.

Bored in Florida, they were. Made us promise never to go back, they did.

To me the most wonderful time on 30A is the off season…even during the heavily crowded Spring Break weeks. Lots of celebrity can be spotted there-my son and niece ran into Luke Bryan while they were all out for a morning jog last year. Luke and his family must really like 30A because a few months later he was coming out of a Starbucks as I was walking in and on the same trip Sheryl Crow and her parents and 2 little sons were leaving Market Café in Seagrove as we walked in.

Way better than seeing celebrities is the bike riding. In our family, beaches and bikes go together. There are bike paths that run parallel to the entire 2 lane highway of 30A and each quaint beach has it’s own wide board paths to either the beach or nature trails. We start and end every day on a big bike ride. That is part of the charm for me-we bike to breakfast, then do a long bike ride before we hit the beach. After dinner we do another long ride and end the day biking to the frozen yogurt shop. Bliss.

Me and my sis, Pam, hitting the early morning trails. 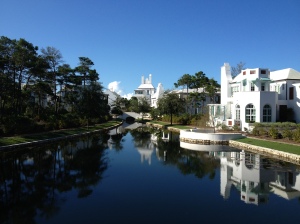 The only exception to this was last year when my hub and I were down on 30A with our oldest son and he talked us into riding the bike trails in Grayton State Park, right off the main highway. #1 son is addicted to adventure and he and the hub are in great shape, so I determined that I was going to keep up and not complain (as I can be prone to do with intense adventures that as a mom of 3 boys I have often gotten roped into) as we rode our bikes off the paved bike path and into the sandy palmetto forest floor.

#1 Son and Hub….I’m the weak link in their bike adventures.

It was hard riding for 2 hours. And that’s the good part of the trail. At one point there was what I swear was quicksand and we had to get off and carry our bikes around the hazard. (My hub carried mine because, well, I’m old and by that time I had long dropped my “no complaining” state of mind.) I was never so happy to see a paved road again in my life!

My son said, “Mom, haven’t you ever seen the commercials for Florida State Parks, they say ‘This is the REAL Florida.’”

To which I said…”Well. If that’s the case, I love the fake one better.

And that’s where I’ll be soon…toes in the sand.

This entry was posted in Family, Midlife Maze. Bookmark the permalink.