My baby is getting married in three months.

Our nest will truly be empty. It’s such a weird thought. Presently, he works in New York during the week. On Thursday night, he comes back to our old farmhouse and all is right in my world. Our weeks are quiet and our weekends are bustling.

For a few more months, at least.

The other two boys leaving home did not hit me quite as hard as it has with “my baby” son, probably because we still had one at home. This is it.

To ward off the looming depression I decided to console myself by changing his room into a new guest room. We have a lot of company coming in the fall and during the holiday season, so I thought with the wedding in October this was a good time to get the transition done.

This is the room he has had since he was 4 years old. His “big boy” room. I had learned with my 2 older sons, not to choose too babyish of a décor, so that it wouldn’t have to be changed often. Together, he and I picked out a border to go with his dark tan walls that had camping motif, complete with a big brown bear. 19 years later, we both still like it. But he’s moving to Denver….where there are real bears.

I remind myself that this is the healthy transition to adulthood. And marriage.

“For this reason a man shall leave his father and mother and be joined to his wife…”    Genesis 2:24

Last Monday morning, armed with DIF in a hot water sprayer, I attacked the border.  As I scrapped the border off, I got nostalgic about him getting married and leaving our home. His room is the last one that had reminders of the boys that used to live here. The other two boy’s rooms have long been converted to guest rooms.

As I scrapped off the soggy border, I started thinking about what my life was like when I put the border UP almost twenty years ago. It was the spring of the year when we completed our home addition that included bumping the nursery into a full size bedroom. My boys would have been 9, 7 and 4 years old. We would have been at the beginning of baseball season.  3 boys, 3 teams-2 parents. School would have been winding down and I would have been involved with all the end of the year activities, signing up for summer activities and planning for the long summer ahead of us.

Swimming lessons, berry picking, play dates at the pool with friends, picnics, VBS, our family vacation to Myrtle Beach would have all been blips on my calendar. We would start our mornings with long breakfasts, followed by what I called “15 Minute Clean Up”. This is where I gave each boy a couple of jobs to do in the house, cranked up the music till the walls rattled and we raced around as fast as we could to do our assigned chores. At the end of the 15 minutes, the music stopped and so did the cleaning. It’s amazing what 4 pairs of hands can accomplish in 15 minutes a day. It was equal to an hour a day of cleaning mixed with fun.

Remembering all those blessed daily routines, brought on the weepies.

So I pressed onto the job I truly hate, painting. Every nail hole I patched, every dent in the plaster from who knows what (I’m sure he does!) I felt that I was removing a layer of time.

And a layer of my life and of his life too.

Over the next couple of days the transformation began taking shape. When I started rolling on the new paint, I felt a twinge of excitement, thinking about the layer of new life being laid down in that room. Family and friends would have another comfortable place to sleep when they visited. Hopefully, there will be sleepovers with grandkids and I will tuck them into bed in this room. Together we will read books, and say prayers before I scratch their backs and stroke their hair as they drift into sleep. 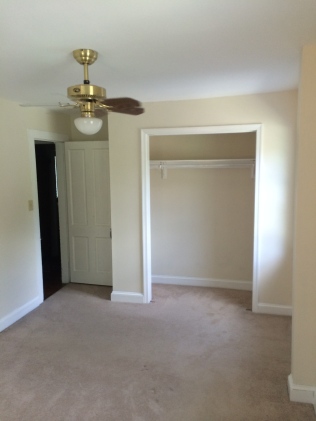 I found myself smiling and my sorrow lifted (slightly). I was able to thank God for different seasons of life and asked Him to help me move into this new season with grace and joy.

“For everything there is a season,

and a time for every purpose under heaven;”

This entry was posted in Faith, Family, Farm, Midlife Maze. Bookmark the permalink.

8 Responses to Peeling Off Childhood